Save your Confederate pennies, boys 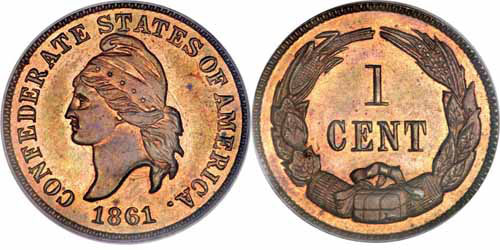 Practically everyone with any interest in the Civil War, especially nowadays with Google and other search engines, has seen a Confederate dollar bill or higher denomination. But the Richmond government issued coins, too, such as this copper one cent. These were rare, though, only about fifteen ever being made and thus they can fetch as much as $120,000 each today.

Soldiers had no choice but to deal in Confederate money since they were paid in it, but they and most Southern civilians used dollars and other Union coins when they could get them, they being so much more valuable, especially as the war wore on and inflation annihilated CSA currency.