One man used an axe 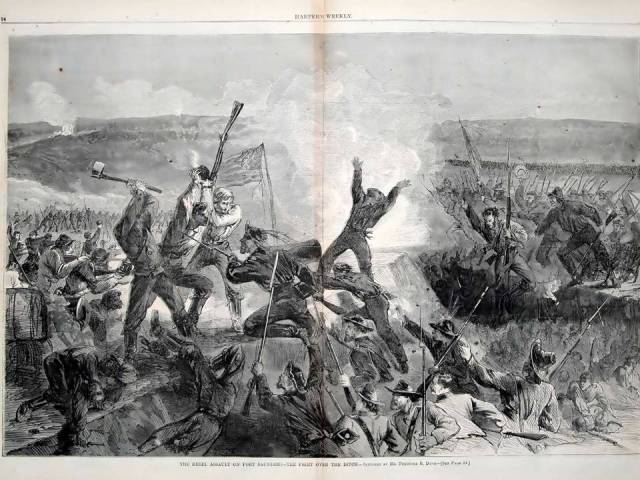 This Harper’s Weekly lithograph is the only picture I know of that shows a Union defender wielding an axe in defense of the Northwest Bastion of Fort Sanders.

“One man used an axe,” U.S. Army Lieutenant Samuel Nicoll Benjamin wrote in his after-action report long after the battle, in describing the zeal of the outnumbered Yankee defenders.

I fleshed out the cryptic detail in the novel, putting the axe in the hands of a New York private, though not upon the parapet as shown in the lithograph—from whence he would have been shot down forthwith. My fictional private used it on a Rebel who had gotten inside the bastion through an artillery embrasure.

“I jumped out of his way, I was so surprised,” my Massachusetts Sergeant Timothy Chase recalls in his narration of the defenders’ chapter. “He’d hoisted himself up on the barrel of the cannon. There were more Rebs behind him, essaying to do the same.

“’Surrender, you damned Yankees!’ he yelled, waving a pistol at us. ‘You will all be our prisoners in a few moments.’

“I believed him, I was so surprised to see him inside the bastion. I was about to throw down my Springfield and surrender when a private from the New York Highlanders appeared from the Reb’s blind side. The private hit that Reb square in the head with the blade of an axe, cleaving his skull, bespattering us with his blood and brains. That was the end to that surrender business.”

The preferred lithograph of the few histories on the battle (scroll to the bottom here) prominently shows a defender leaning out over the parapet with a pistol. There is no one in view with an uplifted axe. I imagine the axe was considered too bloodthirsty for the admittedly heroic victors of the Civil War, though soldiers through the ages have not scrupled to use whatever weapon was at hand to defend themselves and their comrades.