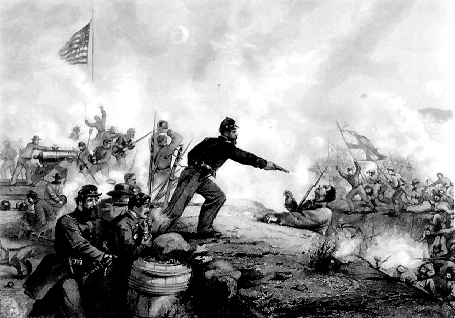 This imaginary view of the fighting for the Northwest Bastion of Fort Sanders was drawn in 1891, long after the event when anyone foolish enough to stand upon the parapet likely would not have had time to aim a pistol.

He would more likely have been shot down immediately by the Rebel riflemen who were massed at the edge of the deep ditch below the walls where their comrades were bleeding and dying.

Retired Texas daily newspaperman
View all posts by Dick Stanley →
This entry was posted in "Knoxville 1863", Fort Sanders and tagged Fort Sanders, Knoxville 1863, The Siege of Knoxville. Bookmark the permalink.