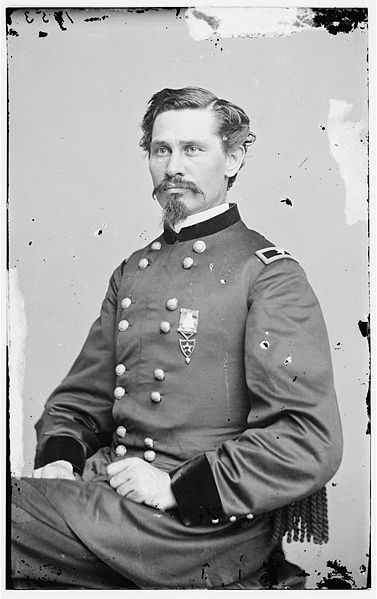 Captain Poe, Gen. Burnside’s chief engineer, worked with Lieutenant Benjamin in preparing some of the innovative defenses at Fort Sanders. (No spoilers; read the book.)

Poe (West Point, Class of 1856) rose to colonel of volunteers, then was appointed brigadier general, only to have the appointment rejected by Congress and his rank diminished to regular lieutenant. By the time of Knoxville, he’d been promoted to captain.

Afterward, he was breveted major and became Gen. Sherman’s chief engineer. He was a lieutenant colonel when he supervised the burning of Atlanta and a colonel after the capture of Savannah. A month before the war ended, as he wended his way through North Carolina with Sherman, Poe was again promoted to brigadier general.

After the war, he built locks and lighthouses on the Great Lakes, until he again returned to Uncle Billy’s staff when Sherman became general-of-the-army from 1869-83.

UPDATE:  Forgot to mention and link to this new biography of Poe, though it’s too pricey for me (even a used copy is $17) and its sales page doesn’t have the Amazon Search Inside feature I normally insist on before I’ll buy any book.