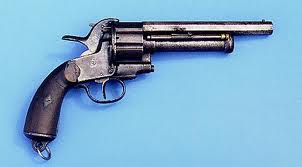 The revolver which Lt. Col. Alfred George Washington O’Brien pointed at Sergeant Timothy Chase’s nose was a curious one. The LeMat,first made in New Orleans in 1856, had two barrels: the upper one was a smoothbore normally reserved for a .36 or .42 caliber ball, and the one below it was a 20-gauge shotgun.

Hence the popular Southern weapon’s apt nickname: The “grapeshot revolver.” O’Brien’s was a late-model .44 caliber one. Cabela’s sells a nine shot, rifled .44 caliber working reproduction. And there are several videos of loading and firing the weapon here.